Today is a bit of a rant; A conversation with a co-worker got this ball rolling and I thought HMMMM maybe a little reminder to other parents might be nice. So hate me if you will, or agree with me if you so choose. It’s all good. Sometimes when raising our kids we are our own worse enemies

It’s that time of year again, the local paper tells the story. There are signs up all over town and anybody who is anybody has seen it posted on their Facebook page, a recommendation from a friend or board member! Little league baseball, girls softball, volleyball and kids basketball. Swimming. rugby, football and lets not forget soccer! All the wonderful sports that our children beg us to participate in are gearing up for another full season! Kids sports are great, I think all kids should have the opportunity to try out for multiple sports hopefully finding something they really enjoy. Nothing beats the feeling of accomplishment from participating and finishing seasonal sports. It’s a great way for kids from all over your area to meet and make friends with kids from other districts or schools. In my experience this makes the transition into middle school and high school much easier for kids when they get older.

But what I don’t like about kids sports, what really gets under my skin, the thing that makes me agitated, irritated and down right frustrated! ( I think I covered the three “ated’s”) Is the death of sportsmanship. Not from the kids, but from the parents. The overbearing, unsportsmanlike parents that come with each and every season. The parent that is single-handedly the loudest most obnoxious person at the event. The parent that publicly berates their child when that child doesn’t live up to their expectations.

The parent who after embarrassing their child to the point of tears usually turns to another parent and justifies their horrific actions by pulling an “Al Bundy”. You know what an Al Bundy is don’t you? The “In high school I scored four touchdowns in a single game” routine! Because everyone knows that you, peaked in high school, therefore your child must bear the brunt of your failures and become a pro sports star to carry on the incredible legacy you have left behind! Yeah that guy! Oh and now that I have started this; it’s not just the guys either! It’s the moms too! You can’t miss them, heck, no-one can! They are the loudest most belligerent ones in the building! More obnoxious than any man could ever become! They slap their boy in the back of the head letting them know if their father was there he would surely be disappointed in this sub-par performance. They scream at their daughters constantly, so loudly the coach can’t be heard! And lord have mercy don’t you dare mumble anything about the team doing poorly when their baby is out there, she will turn on you like a lioness protecting her cub. Even though you never said anything in direct relations to little princess.

Listen its like this, I coached baseball for 5 years, it was fun, no; let me rephrase that, it was great! The kids were fantastic! They all come with desire and a wanting to learn the game, how it’s played and the rules. Many parents wish they could be present but balancing the needs of their kids along with the schedules that youth sports brings to the family dynamics can be difficult. That’s where a good coach can really bring the game to the next level for these kids! We are there everyday, on time, ready with a practice plan and a will to give our love of the game to a group of children that really wish to learn. If its done right the kids look up to us, we show them respect and admiration for a job well done.

But every year no matter how hard we as coaches try there is always at least one “Al Bundy” that shows up running his/her mouth about the poor “quality” of coaching, or constantly yelling out new directions during the game which is inevitably NOT what you wanted the kid to do at that very moment. All you can think is if you wanted to be a coach why didn’t you sign up!

At some point that parent will also take great pleasure in berating a ref or two just for fun. Then just when you think everything is calmed down and under control, that poor child will be on the bench crying. CRYING! And do you know why? Because that nice, willing to learn, I love baseball more than anything kid will break under the pressure of trying their hardest to do what you want them to do but also trying to do what Al Bundy is screaming at them to do.

Before you know it the kid is underperforming, coming late to practice, causing problems with other team mates and the kid doesn’t know why. It breaks my heart every time. Super competitive, out of control parents bring mental destruction to more talented kids than injuries, poor coaching, and poor performance in my humble opinion. 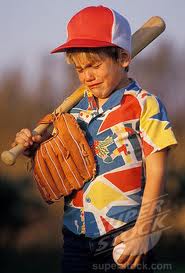 This is what I know; After five years of coaching baseball, the boys and I were headed to sign ups/try-outs. They were not looking their usual “Joe DiMaggio” selves. Sensing something was amiss, I leaned over the seat and asked them what was up? I received a sheepish reply of “nothing”. I said: come on out with it? Silence was my only reply. As they stared, talking to each other with their eyes. It hit me! Yep right then it dawned on me, I had become that super competitive idiot with my own kids? Except I worse than one of those parents, I was the coach…. I couldn’t understand how this happened! I loved baseball, I loved to play it, I fully understood the game and its unique strategies. But with my own kids I had pushed them into not liking the game anymore, by forcing them to play harder and better than I ever dreamed of playing. So I swallowed hard, leaned back over the seat and asked them both; Are you guys playing for me or are you playing for you? With heads hung low they both said; Dad we are playing for you. With that I turned the truck around and we went out to lunch. It was one of the best lunches I can remember.

So listen to your kids, protect them from the “Al Bundy’s” of the world. Even if that “Al Bundy” turns out to be you. Teach them that “Winning” is the by-product of fair play, sportsman like conduct, honest training and a true love for the game/sport they are playing. Praise them on a job well done and praise them on a dignified loss, teach them to respect their opponents when they lose. For the only way to understand the thrill of victory is through the agony of defeat.

One last thing; as I learned the hard way, just because you played a particular sport, doesn’t mean your kid is going to want to play the same sport. Let them choose, let them try, then let them try something new until they find what they enjoy playing. Also, if they just don’t like any sports that’s ok too. Love them for who they are, because how they turn out as adults is a direct reflection of how you turned out as a parent. Once again, just my opnion….

One thought on “Sportsmanship is dying…”