There appears to be something amiss in my household. Something just isn’t adding up by my calculations. You see with all the time spent going over this particular subject it makes no sense to me why we are having a problem! Now most young men of age naturally figure this out, it is genetic after all. But yet here we are, confused, scratching our heads and wondering, why? Why has this happened to me God? Why? Is it something I said? Is it something I may have done? Please, please let me know! I mean you did bless me with three sons, not three daughters! (Nobody get your hackles up, this is obnoxious satire)

I am not sure the cause, but it appears none of my boys have very good aim.

I know! Strange huh? You would think just because they are boys “good aim” would come naturally to a young lad. Seriously, having good aim must be in our genetic makeup as “men” don’t you think? The hunter, the provider, the sole servant to the family. How hard can it be? Just point and shoot! How much skill can that possibly take? Point and shoot! Point and shoot! For the love of god, just point the damn thing and shoot!!! Yet time after time all three of them miss! No skills what so ever! Its frustrating! I was shooting at little targets when I was three. Sure I probably missed a time or two, but every single time! Come on! Point and shoot! I even tried getting them to breathe while doing it. You know, take the proper stance, legs spread apart, shoulders square, point, breath in , slowly exhale then shoot! It’s that simple, yet none of my boys seem to be able to grasp the concept!

Oh my lord its like they have Parkinson’s, body shaking, and jerking around uncontrollably. Nervous stance, weak grip, and absolutely zero accuracy! They shoot everywhere but the intended target. Experts refer to “painting” the target. Zeroing in on your intended point of contact then hitting it with everything you have using controlled precision! I can tell you one thing for certain, they know how to “paint”alright. “Paint” everything but the intended target! Oh yeah these boys couldn’t hit the broadside of a barn standing three feet away! Hell, I would even spot them the other two feet!

It finally came to a head this morning. Man it was ugly. One at a time they lined up at the door, and one at a time they sprayed patterns on everything except where they were aiming! My wife finally had enough of this fiasco and opened fire! (pun fully intended) She really let them have it with both barrels. Those boys never knew what hit them. You see the boys lack of aiming ability had finally become their undoing. The wife had identified all three as the scurgiest of hombres in our house. The lowest of low lives, the bottom of a snails belly! No more patience, no more cleaning up after them, no more second chances. From here on out there was a new sheriff in charge! It was mom, and no matter how much “practicing” I swore to on their behalfs, the end had come for the Blackcloud Ranch sprinkler boys! 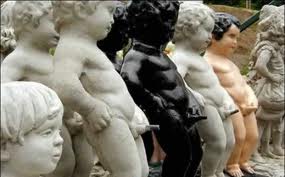 Oh yeah, my boys are toilet violators. The worst kind too, they stroll in and out in seconds! Sometimes the toilet seat is left up. Sometimes the toilet seat is left down. Either way the boys are known for leaving behind the kind of unsanitary conditions that would make a truck driver blush! Oh yeah it’s that bad! It happened this morning, it went down something like this….

Three boys walked into the bathroom and without hesitation, without remorse, without so much as an ounce of decency they covered the walls, the seat, the lid, heck even the floor! Like a shaky teenager holding his first Colt 45, they were trembling and swinging it 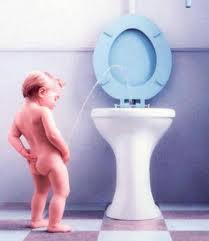 around uncontrollably! (of course that might be some of the aiming problem) Or a firefighter trying to contain an out of control firehose! It was everywhere! Amazingly the Three stooges would have gotten away with it too if weren’t for mom walking in minutes later to relieve herself upon the sturdy porcelain throne. Carefully lowering her britches she was met with the horrific indecency of a wet barrier forming between her skin and the seat below. Jumping up and slipping in the yellow ring that laid at her feet she was last heard in a shrill voice swearing to the deaths of who ever left this unsanitary trap for her to stumble upon. She vowed from that moment on, no person of female persuasion, in our house or visiting our house should suffer such wrong doings ever again! The boys were promptly tracked down and when cornered they begged for mercy..

Mercy was not found this day my friends! Oh quite the contrary, the boys have been banished to our bathroom downstairs for an undetermined amount of time. Cleaning the toilets with bleach they have accepted their fate, understanding the consequences of irresponsible toilet tinkling.

They also know, should they shower the downstairs bathroom with the same zeal as the upstairs bathroom the only place of bodily relief available for the three of them will be a bush or tree on the backside of the property. Just like in the old west. When you gotta go, you gotta go but for them it will be outside rain or shine…

Moral of the story; Simple

If you sprinkle when you tinkle please be neat wipe the seat…….. 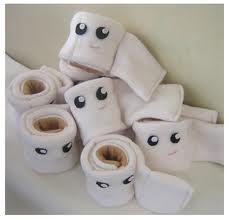