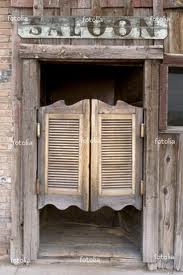 Saloon doors open as the wind drives a tumbleweed through the barren streets of a lonely little high plains town. Inside a half-witted piano player takes note of the mid-sized stranger strolling slowly through the doors, across the threshold.  Quiet falls upon the gallery of scraggly, dirty, motley looking inhabitants renting temporary refuge inside this dank place of excess.  A bartender moves slowly as to not give away his left hands position upon a firmly mounted sawed off double barrel beneath the bar. The stranger moves forward entering the center of the room, eyes steeled upon a table of well dressed men and low brow women.  Money on the table and enough whiskey to purchase a round for the bar three times over are strewn about.  With every step the stranger takes, the farther away life’s crustaceans scurry.

Before long the stranger is standing alone, jaw locked tight, hands laying limply by his side, a gentlemen dressed in what would be most mens Sunday best sits before him.  Without turning around the well dressed man continues to play poker to an unwilling table.  The entire population of the bar have worked their way into optimal viewing positions, some cowering, some standing tall, but all waiting to see who makes the first move.  The well dressed man stands to face the stranger, slowly he turns narrow eyes peer from under the brim of his hat, instantly showing equal disdain for the presence before him.  The stranger speaks…..

Oh man I love westerns! They have filled my head with fantasy for over 40 years! Most of my heroes were cowboys! John Wayne,

Glenn Ford, Robert Mitchum, Jimmy Stewart, Clint Eastwood and James Garner. They were real men! Stood for what they believed in no matter the cost. If you weren’t with them you were against them and that meant one of two things; you ended up dead or you duked it out, then shared a whiskey after the brawl.

As a child we had four channels to choose from, today we have over 800! I miss the old

days, as a kid it forced you to watch what was on, you didn’t have any other choice!  If it weren’t for those four channels I am sure I would have missed out on some great televison series! These are a few of the wonderful shows I watched on many a rainy day; Bonanza, Big Valley, Gunsmoke, Bat Masterson, Davey Crockett, F-troop, The Lone Ranger, and Gene Autry.

Dont even get me started on the fantastic western movies I have seen over the years!  I compiled a small list of westerns that meant something to me, that moved me and continue to garner my attention to this very day. These are not just average westerns, no, no, these are westerns that force me to stop what I am doing, drop everything cold just so I may sit down too watch!

The Kentuckian, The man who shot Liberty Valence, The Fastest Gun Alive, The Big Country, Rio Bravo, The Alamo, Mclintock, A fistful of dollars,

The Man From Snowy River, A River Runs Through it, Lonesome Dove, Blazing Saddles, Silverado, Quigly Down Under, Hildago, Unforgiven, Tombstone, Appaloosa, Wyatt Earp, and 3:10 to Yuma.

There are numerous westerns spread over many generations, I can honestly say I have sat through most genres; Epic Westerns, Spaghetti westerns, and B movie westerns. Although I may not have liked them all, I certainly enjoyed most of them.

My all time favorite would have to be Silverado. I have seen it more times than I can honestly count.

The shootout at the end is one of my favorites.  Second runner-up is

Tombstone. When Kurt Russell tells Ike Clanton; “tell all the other curs the law is coming, you tell em I’m coming, and Hells coming with me you hear! Hells coming with me! “ is one of the best lines ever in a western.  Big Jake and Mclintock would be tied for third with Appaloosa bringing up a solid fourth.  The Man Who Shot Liberty Valence would finish us off in fifth.

High Plains drifter, Hidalgo and A river runs through it for honorable mention.

So now that I have completely lost your attention let me explain where I am headed with my school girl/boy crush upon the western genre. These were and still are my heroes!  As an adult when ever a great western comes along I feel as though I am a 9-year-old boy lying on the living room floor gazing upon the open plains dreaming of one day becoming a real bona-fide cowboy!  A man among men, a moral and righteous man with ethics beyond refute! 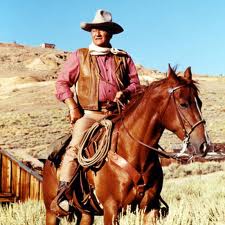 They make me feel alive, reminding myself that no matter how hard life has become, no matter what problems we may encounter, I can disappear into a safe place for just a little while.  My brain can shut off and escape all the modern-day trappings that envelope us.  These characters are bigger than life! I want to be them if only for a little while.

So what I am wondering is; if I can feel this way after 45 years, what genre will my kids still idolize as adults?  Movies today are centered around gruesome murders, Horrific villains, vampires, zombies, disgusting hate crimes, and social injustice.  Comedies are centered around drugs, ignorance, more social injustice, racism, and disrespect for parents and any unsuspecting figure of authority. Who are the movie stars you would consider safe to set an example for your kids?  Which ones will your children remember as adults for the parts they portrayed?  What actors will still have a viable meaning full career after thirty years, where our children will someday preach the gospel about his/her acting ability?  Or is it completely different now and I am just missing the point?  Are we as a society so plugged into electronic devices, revolving around our friends lives along with news from around the world; there is no longer a need? With so many fantasy world options (video games, Facebook, twitter) have our kids lost the ability to think for themselves? To fantasize about healthy alternatives to the lives they are living?  It all seems mystifying to me.  Am I alone in this? Am I blowing this way out of proportion?  Am I stuck with the Hunger Games and Harry Potter becoming the standard by which they disappear from reality? Or is it because I can’t let go of my dream, inadvertently putting a moratorium on theirs? I just don’t have an answer but I am definitely worried.

Oh well, for now I am riding off into the sunset, Henry Rifle strapped to my saddle and six-shooter by my side, its time to be moving on…….

Oh and if you are wondering how my little story from above ended, that’s the beauty of writing, use your imagination.  You tell me….. 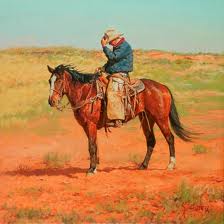