He sat there, head hung down, dejected, feeling a mixture of sadness and anger. A year had passed since he took up this new endeavor, four months had passed since his last attempt. He and his partner strolled slowly from the arena of play trying their hardest not to make eye contact with anyone who had noticed what had just happened. Through the gate was all he could think about, lets just make it through the gate. He passed another contender on the way out and gave her the obligatory “good luck”. He meant it, his partner made eye contact with hers and they both made a feeble acknowledgment. He wanted to stay and watch as she had also just recently taken up this endeavor. Her partner was definitely ready but you could see the nervousness in her eyes. Yet he couldn’t bear to watch, he just needed to get outside and take in some fresh air, they both needed too.

As he cleared the opening to the coliseum they both took a long deep breath.

Nothing had gone as planned. They both knew it, and no words need be spoken. It was hard on them both for they practiced day after day, working hard honing their skills. His partner was coming along quite nicely, yet he had only shimmering moments of light. His play was good, but to get in sync with his younger partner meant he needed to be better. Running, sprinting, cutting back and forth, they both were getting into incredible shape. His partner had gone from a small scrappy fighter to a muscle-bound machine of might and will. He as well expended a tremendous amount of effort in the arena of play. Grunting, sweating, working hard, eventually shrinking down from a bloated toad to a balanced quicker moving adversary.

Together the two of them had days where either was discouraged and upset with the other. Yet they continued to work as a team time after time. Some days his partner would be so angry with his obvious lack of performance, things would become physical. This over zealous attitude earned neither one of them any tangible successes. Yet the next day they would be back at it, working hard, knowing they had it in them to be the very best. He secretly admired his younger partner, for her skills were lightning fast and aggressive. He always felt bad when he left her hanging with no rebound or solid attempt to repair the damage he had done. He was glad she stayed by his side though, always willing to make things better on the next go around.

Two weeks to go and they both were feeling some synchronicity! They were excited and felt accomplishment was right around the corner. They trained harder than before and after each practice he had great words of encouragement for his partner. They were both happy. They could see the light. One week to go, practices were steadily improving, successes were becoming more frequent. Two days to go a battle plan was set, confidence was on the rise, everyone could feel a solid run was in their future.

The day finally arrived, both rose early and ate big healthy breakfasts. Equipment was cleaned and loaded for an on time departure. Arriving at the coliseum brought a sense of calm to one, excitement to the other. The calm one walked in to check on registration, scout out the facility and the competition, while the excited one stayed behind hoping to reign in all that energy she held inside. The day went along smoothly, contenders were doing quite well and the two of them could feel their time was near. They donned their equipment and both strolled into the practice area ready for a solid warm up. She was doing everything right. Her roll outs were solid, her cut backs crisp, her slides on point she was ready! Her nervousness had ceased, her head was held high and confidence was at a premium.

Funny thing about confidence, sometimes it can turn into nervousness. He had all the confidence in the world, he showed a good face, but as with the times before, he just couldn’t turn off his brain. And that is the death of any good athlete. Its one thing to know how to play the game, to know how and why you move here or there on the field of battle. To be able to stay calm and collected when things go sideways, and in this sport that is the main direction of choice. But if you can’t turn off your brain and just trust your instincts you will fail. If you can’t turn of your brain and trust in your partner you will never succeed. Thusly your partner will never trust you, leaving you both with nothing but failure. This is what he had done to sabotage the team again. All the work, all those practices, all the trust he had gained in his partner. All the trust his partner had gained in him. All gone the moment they crossed that line and the two of them made that first “almost perfect” cut right in the center of the arena. You would have thought making a great first cut would have calmed him down, left him at ease, allowed him to relax, but instead he felt none of that, why? because he couldn’t turn off his brain and just let things happen. Too bad, too bad for them both…

And so he sat there, head hung down, dejected, feeling a mixture of sadness and anger…

I wrote this about Cassie and I. We both compete in the well-known sporting event of “Cutting” .

My partner (Cassie) is a gorgeous 4-year-old quarter horse who I adore. She is athletic, fast and incredibly kind. She is also very forgiving. She has been trained very well, she loves her “job” and I know in my heart one day we will win a lot of events. She deserves too for all she has put with on my behalf.

I wrote this in a nondescript fashion because I feel it relates to all disciplines. If you are not dedicated and willing to accept your failures you will never succeed. Sometimes those failure are laughable, sometimes they are painful, sometimes they are 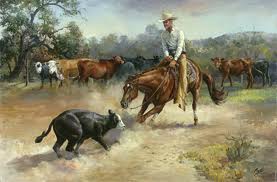 embarrassing. But whats important is you learn from them each and every time. For no one is perfect at anything the very first time they try something. My wife put it best when she said; Honey the very first time as a fireman you walked into a structure fire, did you perform every task perfectly? Of course the answer was no. How many fires did it take before you started to fully understand what was happening, improving your outcome of success? I replied MANY. She looked at me a stated quietly; same thing…….

My son also rides in this sport, and is the reason I wrote this little synopsis of yesterdays events.

You see sometimes in life we learn from the ones we teach. Even if that “one” is eleven years old. I wrote it on my sons behalf as a reminder to myself that with hard work comes great reward and sometimes even when everything feels like its going right it all falls apart and failure is imminent. Usually at no ones fault but your own. We learn from failure, we learn from embarrassment and most of all when we are done spewing these little virtues to our children, we learn from them as well. For as I left the arena yesterday, upset and dejected my eleven year old son walked right up to us both and said; Its Ok dad, you guys will get’ em next time. I thought your cuts were great! Then with a big smile on his face he told me he loved me and gave Cassie a kiss on the forehead.

of wisdom. My heart filled with pride knowing he felt comfortable enough in our relationship as father and son to expound my own words upon me. As he walked away with me in tow to watch the rest of the competitors I couldn’t help but think to myself.

I think he just “Eddie Haskell’ed” me. Little bugger! He outscored me today and I know he is going to remind me of this fact over and over again!

Oh well, he deserves too. Plus there is always next months show……

One of my better quotes; I think it fits in this case.

I would rather work with five guys who have tried and failed miserably at something one time in their life, than one guy who has succeeded at everything. 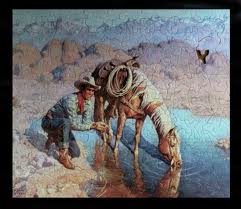