Well I wasn’t going to do it! I promised myself and screamed to all who would listen! No way in hell was there any chance of me writing about New Year’s resolutions.  Everyone does it; the blogosphere is loaded with rambling and grumblings about new promises, kept promises from years past and flat out lies.  Nope, no way! It just wasn’t going to happen!

Then it dawned on me.  We; as in the human race aren’t supposed to be here! The world according to the Mayan culture along with several 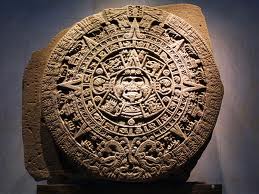 thousand overly educated individuals was to have met its fiery demise on December 21st! Yet here we are, 7 full days after the end of the world and a mere 3 days from the beginning of a new recording of time (2013).

So what does this all mean for me and the loathing I hold towards New Year’s resolutions?

It’s a new age, a new beginning, it’s the first day of the rest of my life, and therefore I should put aside my personal feelings and be celebrating not commiserating. The very thought of making resolutions once a year to solidify the minor changes one should make accordingly throughout the year long cycle is absurd at best! Yet for some reason my heart feels obliged to give it a shot.  2013 New beginning, first days and all, it just makes plain good old sporting sense..

So here it goes!

Not be so damn sarcastic! Shit I have already failed…. I TOLD YOU THIS WOULDN’T WORK!!!

I Betty do solemnly resolve in 2013 too…

Quit being so angry: unless of course the situation warrants it, or it’s needed to purposely expound a point! Or my Irish becomes inflamed, or even if I am trapped in a situation where tolerance over ignorance shown towards stay at home fathers and dads in

general becomes more than I can take, thusly leaving me no choice but to rage against a proponent with my expert use of the English language in an obscure tirade upon my blog. Yeah passive aggressive attack, that’s the ticket! See it’s easy to put aside blood boiling rage and quit being so angry! Maybe this isn’t so bad! Let’s try another one!

Laugh more with my children: A child’s laughter is a gift from god and should be enjoyed every chance we get. Plus by sharing in the laughter you are helping teach your children to laugh and relax, thereby allowing them to share the very same learned expressions with friends, ultimately leading to your children being able to laugh at themselves; a good quality by the way.  Of course there is the exception to the rule; you know when they are laughing

and you are not due to them having done something so erroneous there can be no alternative emotion than to become irritated.  Such as finding pee all over the bathroom floor and dripping down the sides of the toilet!  Recognizing the difference between light dirt and poo smeared across the shower curtain! Oh yes, because apparently our little angels eyeballs haven’t developed to the point of recognizing the need for toilet paper BEFORE sitting down to do their business! Yet the pea sized brain has acquired a MacGyver like reflex allowing them the ability to think quickly and improvise in sticky situations leading to the shower curtain being used as Charmin!  Yeah the laughter is real hearty while donning latex gloves and decontaminating the old levorotary! Laughter has a tendency to fall off the charts after I have told them several  times to clean their rooms and all they’ve done is throw a sheet on their 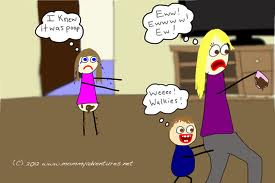 beds after shoving everything that was on the floor under the bed and into the closet! Or after begging them to feed their animals before dark only to be ignored! Now that it’s dark outside no one is going to go out to the barn and feed, so instead of having just done it the first time they were asked they throw a crying screaming fit about how scared they are in the dark and they really shouldn’t have to go out and feed now cause it’s just too damn scary! Yep more laughing is coming right up in 2013!

Eat healthier foods: last year was a real life changer for me in this department! Eating was not just a means for sustenance it was an event! Big breakfast, big lunch and even bigger dinners! The only exercise my body partook in was getting a beer from the fridge along with the subsequent 12 ounce curls that followed! But I made

a change and lost 20 pounds this year alone! So I promise to keep up the good work with a solid diet and exercise to match!  Holidays will be the exception of course. Where I shall continue to stuff my face with all the greatest holiday creations one can muster! Cookies, chocolate, mince pies, cupcakes, more chocolate, apple pies, pumpkin pies, candies of all sizes and did I mention chocolate? Other than that all healthy foods, in small portions; oops I need to also include dinners at the firehouse as an exemption, I mean I really have no control over what someone else cooks, and I wouldn’t want  to be perceived as rude so firehouse dinners are definitely out! But for every other meal, Yes! Better, healthier foods coming right up!

Go green in 2013! Our family is a huge believer in replenishing our resources by reusing and recycling! Nothing brings us a greater sense of good than helping out our environment! We placed windmills on the roof of our shop to produce electricity and are looking forward to possibly placing solar panels on the property generating more electricity for ourselves and others who may benefit! But we have one larger issue. We need to purchase a fuel efficient “green” truck, yet the last time I checked they don’t make a fuel efficient “green” vehicle to replace my 3/4 ton diesel truck

that is connected to a horse trailer pretty much all week long and in today’s economy it really isn’t feasible to purchase a “green” car and a new “lesser carbon footprint” truck to replace my tattered old truck! So to go green it’s going to cost us well over $100,000 dollars! Who the hell has that kind of cash lying around? Cold day in hell before a loan for $100,000.00 is taken out under my name for anything other than a house! Maybe I should just stay focused on recycling materials? Smokey truck, recycling cans, see one offsets the other, I am already ahead for 2013!

Drink less alcohol: Social drinking has always been a big part of my life! Nothing beats having a brew with your buds or a glass of wine with your lovely wife! At three in the morning when you have had to much, just get up, hover over the toilet and purge away!  Good times and weight loss rolled into one! Yet having cut back dramatically in 2012 I have recognized the need to do more! 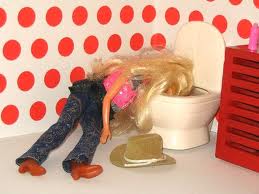 Drinking can definitely become a health concern and at my age I really need to be focusing more attention on life longevity.  Speaking of life longevity on the Dr. Oz show I saw red wine is actually good for you! Seriously, a couple of glasses a night are supposedly good for your heart! Man that’s like almost a bottle a night! Yee Ha!  Maybe I’ll have to re-think the whole drinking even less theory and look into the redeeming factors associated with Jack Daniels too? Anyone?

There you have it! Betty has gone against his better judgment and laid out five resolutions for 2013! Funny though, I feel as if they are destined for failure and I am not sure why?  Maybe it’s that whole sarcasm resolution I failed in the beginning.  Hmmmmmm…..

Those who say you will never amount to anything are really just projecting their own fallacies.  Its bullying through intimidation.  Hold your head high, be proud of who you are and thrive.  Carry on that is all..

Knowing ones self-worth is of paramount importance. If you don’t know, that’s fine, but please don’t act confused as others around you struggle to estimate its cost.  Just saying..