Last night before going to bed, my 11-year-old called to say hello.  Within seconds there appeared to be tension in our conversation.  When asked about his apparent discontent he slowly started whimpering and within seconds it became a gale force storm of tears.  Jake wanted Cody and I to come home. He cried and through his whimpering, I deciphered he missed us terribly.  I felt helpless, as a father should I suppose; usually when he misses me a short trip to the firehouse will bring quick consolation; returning his normal demeanor. But there was no short trip, no hey buddy I’ll be home tomorrow, instead he is regaled for his bravery being the “man” of the house while his brother and I are away.  After a few moments of pandering to his needs, he calms down.  I miss him, I feel horrible there is no way to comfort him, to hug him and make his fears go away, but slowly he comes around, he pretends to understand.  After a few “I love you’s’ and I’ll be home soon, he giggles slightly when I tell him goodnight. “Goodnight turkey lips” usually works every time and this time was no exception.

The good news? I slept all night! Yep that’s right, soaking sweat, dogs barking, parties next door and all! Nothing a good set of ear plugs (thank you John C) and a few days of mental and physical exhaustion can’t break you down too.  It was fabulous!

Once again we met after another of Madame Lulu’s wonderful meals. Today was a big day

for our crew. No more playing around, a full days work lay ahead and there was plenty of work to go around.  After meeting with the crews, discussing the heat index, water intake, our urine output and covering our job site safety bullet points we all set to taking down beams.  The beams ran the length of the building tying the trusses together.  They needed to come down as one piece, all roughly 90-100 feet of them. There were five  beams on each side of the building.  Slowly we started unbolting then cutting away the supports.  With one person per truss holding the beams in place after each was cut away we would slowly slide them down the apex of the truss until they reached the edge, then let them drop to the ground where an awaiting crew would systematically cut the unions and stack them for recycling.

crew.  Working together, sweating together, accomplishing big goals in a very short period of time.  I know I have said it many times but the human spirit, is an inspiring thing to behold.  By lunch the beams were gone and we were ready for trusses.

truss/trəs/
Noun:
A framework, typically consisting of rafters, posts, and struts, supporting a roof, bridge, or other structure: “roof trusses”.

The trusses were a little trickier. The needed to have all supports tying them together cut. Ropes were then tied to the peak, applying tension from either direction for stability; then with John C on one wall and me on the opposing wall we would simultaneously cut away the ties that attached the trusses to the cinder block wall allowing the rope crews to slowly lower the trusses 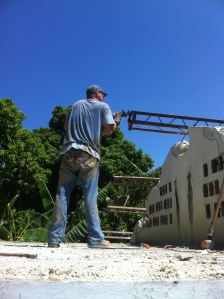 peak onto the floor.  Once the peak hit the floor another rope was tied to an upright end formerly attached to the wall and with a great big pull the truss would slide diagonally down the cinder block wall until it fell onto the floor.  Once on the floor the crews would make quick work of cutting the truss in half, removing it from the building then stacking it neatly outside for recycling.

By 3pm/15:00 there were all but three trusses left.  It filled us with a great sense of accomplishment.  At the end of the day we gathered our group to thank everyone for working so hard and staying safe.  We had Caz tell the Haitian crew how honored we were  to work alongside them and how we looked forward to another safe productive day on Tuesday.

Today, being our first full day of work I also fully understood why we quit working at 3pm.  The heat! The humidity and heat hits a high around 3.  Its stifling to say the least.  For anyone who is not acclimated to this type of heat feels like a Sahara death sentence to say the least.  After today I never once thought about 3pm being an idiotic time to stop work again.

The kids are back, a soccer game is afoot.  Bubbles continues to be the phrase of choice as Paul once again takes time to play with the smaller children.  Mason is also surrounded after every soccer game.  They are teaching him Haitian-Creole, he is taking notes and trying his very best to understand what they are saying.  The interaction between our two cultures is fantastic. 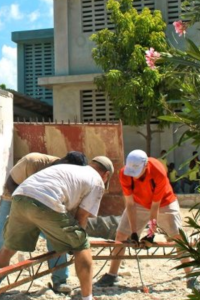 Everyone worked very hard today. Watching Maggie, Cody, Caz and Marcanie pull on trusses, then tear them apart after they hit the ground was pretty cool.  Jan, Heather and Mason were troopers carrying off all the scrap metal. The entire crew continues to

inspire me every minute of every day.  Everyone has a job and even if they have never done anything like the task they have adopted all of them sure look as though they know what they are doing.  They are fantastic human beings, with great spirits inside them.  Once again the day is finished and as I sit in my chair atop the balcony quipping one joke after another with these people I feel as though I am surrounded by family.

Speaking of family I am calling my wife tonight. I miss the sound of her voice more than I can describe.  Its one thing to be away from each other while still communicating every night or even several times a day. Its completely different when you are not able to speak with her for days.  I find myself praying she picks up the phone, and though there is doubt, after all her schedule is very busy tonight; I pray for only a minute or two, just hearing her voice will be all the revival I need to carry on for a few more days. 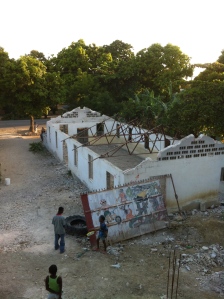