“Never approach a bull from the front, a horse from the rear or a fool from any direction.” – old cowboy proverb author unknown

8 months spent practicing, working hard, traveling, keeping our horses and children healthy have all led to this one moment in time.  Jake and I standing in awe at the spectacle that is the Iowa State Fairgrounds. The Junior High National Finals Rodeo! A compilation, a cross-section, a melding of all the very best junior high students who have competed their hearts out in multiple divisions! Some have bested competitors and friends in several categories, some made here in only one, but they are here and ready to do battle!

Just so you understand why we are in “awe” here is a sample description of what our eyes behold, straight from the ISF web page. No better description could have been penned.

The internationally acclaimed Iowa State Fair is the single largest event in the state of Iowa and one of the oldest and largest agricultural and industrial expositions in the country. Annually attracting more than a million people from all over the world, the Iowa State Fair in Des Moines is Iowa’s great celebration, a salute to the state’s best in agriculture, industry, entertainment and achievement. It is the true heartbeat of the Midwest, unequaled and reduplicated.

The Iowa State Fair, the inspiration for the original novel State Fair by Iowan Phil Stong, three motion pictures and Rodgers and Hammerstein’s Broadway musical, is without a doubt the country’s most famous state fair.

National media frequently rank the Fair as one of the top events in the country. In 2004, USA Weekend named the event the #2 choice for summer fun in America, topping New York City’s Times Square, Cedar Point Amusement Park Resort in Ohio and Disneyland in California. 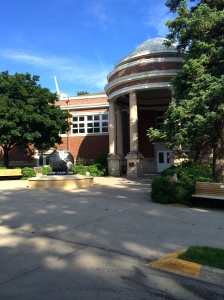 Midwest Living magazine named the Fair one of the “Top 30 Things Every Midwesterner Should Experience.” The Fair is also the only fair listed in The New York Times best-selling travel book, 1000 Places to See Before You Die, and the subsequent travel book, 1,000 Places to See in the U.S.A. and Canada Before you Die.

Iowa’s Fair is also known as “America’s classic state fair” because the event features all of the traditional activities associated with state fairs in a park-like, 450-acre setting (the Fair’s home since 1886). The grounds and the adjoining 160 acres of Campgrounds are listed on the National Register of Historic Places. Most of the buildings pre-date World War I; many are priceless examples of American exposition-style architecture.

Throughout its history, the Fair has been a unique institution, serving to educate, inform and entertain people from all walks of life. It is an outstanding agricultural showplace, boasting one of the world’s largest livestock shows. Also home to the largest art show in the state, the Fair showcases visual and performing arts with a variety of special exhibits and activities.

We (the California team) have been graciously welcomed to Iowa. The people here are fantastic! Polite, friendly and caring.  The show that has been put together for these 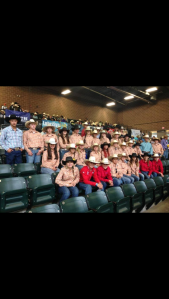 kids is without a doubt unrivaled! From the moment we arrived on Saturday each and every contestant (all 1000+ of them) have been treated as if they all had gone pro! Nowhere have I seen such generosity towards giving each and every child “their” moment. Yes at the end of the week there will be winners, and there will be losers, but each child will have had “their” moment in the sun!

It starts with a green lush campground, where care has been made to keep each state together, golf carts have been provided (at a fee) to help travel across these expansive grounds with saddles, feed and nervous competitors.

Moving to the center of the fairgrounds, the entire area is closed of to traffic (golf carts only) to lessen any chances of injuries to spectators, competitors and animals.  Every manufacture is here in one gigantic pavilion, showing the latest in rodeo gear, tack and animal care products! There are numerous raffles, covering clothing, boots, saddles and yes even a new Dodge truck! Practice roping stations are everywhere for fun and another large building is set up inside as a kids zone for competitors and their family members to go play games, shoot pool or practice roping some more!

The California team consisted of the top competitors in their divisions determined at the state level (just as with every other state). This band of misfits have banded together and for those who didn’t know each other they all are becoming fast friends.  Many of the other states are joining up as well cheering each other on and everyone (parents included) seem to be having a great time.

Sunday morning started with a two-hour meeting which filled the main arena. The rules were laid out and policies explained. The grounds are filled with eyes and any infraction will cost a participant the chance to compete! Sitting in the stands you could feel the electricity as the building was filled to capacity with rodeo kids, friends and family! Flags from all the states represented are flying, including Canada and Australia! Each performance is comprised of 5/6 states with next Saturday being the short go!

The first go was Sunday night, it was a real testing of the waters as far as competition goes and man did the kids live up to the hype! The performances put forth were outstanding! Large groups of parents cheering for their states, kids cheering for friends and the ability to watch everything from both arenas on a large split screen television overhead made the events very entertaining for all involved. By the end of the evening it became clear it was definitely going to be a long week but one they all would remember for the rest of their lives!