Have you ever wondered? Is it a conjured up image? Maybe one captured from a television show or 48 hours special? A poor soul, haggard, emaciated, pale, gaunt, one step near death. There are a dozen interpretations of what Leukemia looks like.

But I ask you? 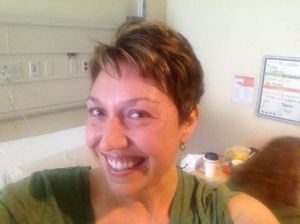 This larger than life human being, my wife with the radiant smile and glowing eyes is the newest face of Leukemia.

Here is her story..

Will you come with me to my doctor appointment?

A question my wife has asked many times in our relationship and depending on the workload that day or severity of anxiety associated with the upcoming appointment, my answer is most always the same.  Yes

This time was different.

My wife has been sick on and off since coming home from Haiti in June. Being the incredibly strong-willed woman she is, it was always dismissed as exhaustion, a common cold or some viral snot delivered accumulation from booger flicking within the confines of her classroom.

Headaches, night sweats, red spots in her throat, swollen gums and an exhaustion level that just could no longer be ignored.  She had it all at some point. The final straw for superwoman came when she texted a dear friend and Haitian co-conspirator who happens to be her dentist. Having tired from the continued onslaught of over the counter drugs, sleepless nights and white spots in her throat, she caved in to ask for help. After a short dissertation in regards to symptoms the immediate response was; You need to go to the doctor!

Blood drawn, panels sent to the lab and a phone call later we were summoned to drop what we were doing and return to hematology for a thorough screening in conjunction with a bone marrow draw.

A bone marrow draw? That means cancer right? Fear instantly ran through my wife like lightning! Together we made the trip to hematology and were introduced to a well spoken, polite young doctor that instantly understood our dry sense of humor.  (this always helps) She was fantastic, easing our minds, letting us know exactly what she was doing along the way.  After an hour I was dismissed from the room so they could retrieve bone marrow and complete the testing process.

During recovery, the doctor came in and told us she put a rush on the order and we should have lab results by Thursday a mere 48 hours later.

Walking silently towards our car we held positive thoughts.  A virus, that’s  all this could be, right? Just a mean old nasty virus! In Haiti, Jacy became extremely sick for two days and this just has to be some form of tropical bug! Yep a tropical bug that’s just hanging on wreaking havoc!

Sooner than later we would discover how wrong we both were.

The next day at noon while in the round pen working one of our many horses, my cell phone came alive. Answering a call where the first words are: “I’m coming home we need to talk” is never good, so when she said those exact words I begged her to please tell me what was wrong. To my surprise, she did.

Its cancer, I have leukemia so we need to head towards the hospital right away.

Its cancer? You have leukemia? What? Did I hear this correctly? No. That’s not what she said is it? I mean we talk almost everyday around lunch and I never remember her even slightly referring to these topics. How was your ride today? or How’s work going? or Man my classroom is filled with the most awesome kids! But never and I mean ever has the topic of cancer or leukemia been the center of conversation, let alone a fear filled opening statement.

Are you there? She asked me through shakey tear filled words.

Yep, was all I could muster. Chin quivering, tears streaming, face flush with heat and feeling like someone just kicked me in the balls. I continued to stand there afraid to move, afraid to blink, afraid to breathe.

Are you ok? I asked

No, was her reply. Of course no is the only reply to such an asinine question yet at the time it was all I could say without blubbering over the phone.

We talked for a minute about why the results came back so early and the importance of leaving for the hospital right away. A few moments later we solemnly said our goodbyes.  Putting my phone back into my pocket, I continued standing in the arena motionless as my horse worked herself. She continued running circles around me finally slowing to a trot, then a walk, looking at me as if she knew something was wrong. After a few minutes with no interaction from me she moved towards me and put her head in my hand. Animals know, animals that give love in return know how and when to move in at just the right moment. I hugged her back.

My wife cried some at work, gathered herself up and cried some more. Other teachers rallied around her as the news broke, spreading like wildfire across the small campus. She received a ride home from some great co-workers so she could pack for our newly, unplanned vacation getaway to Kaiser hospital. When she pulled in the driveway my heart stopped.

Once home we held each other and cried. We wondered how we were going to explain this to our kids, pondering who should know and who shouldn’t know, wondering when do we call our parents? What are we supposed to be doing? You hear about this stuff all the time but your arrogance never lets you believe it is going to happen to you!

Feeling so confused I didn’t know what to do, how to do it or even how I was supposed to act after finding out the woman I love has cancer. I mean it all seems pretty straight forward until it happens to you! Well none of it  mattered, because the news took on a life of its own and before it got out of hand (rumors and all) my wife made a preemptive strike by posting on Facebook exactly what was going on. It worked! We were able to let everyone we cared about know without any chance for misconceptions or the possibility of someone we care about not knowing or hearing third-party from someone else.

Leukemia (American English) or leukaemia (British English) is a type of cancer of the blood or bone marrow characterized by an abnormal increase of immature white blood cells called “blasts”. Leukemia is a broad term covering a spectrum of diseases. In turn, it is part of the even broader group of diseases affecting the blood, bone marrow, and lymphoid system, which are all known as hematological neoplasms.
Leukemia is a treatable disease. Most treatments involve chemotherapy, medical radiation therapy, hormone treatments, or bone marrow transplant. The rate of cure depends on the type of leukemia as well as the age of the patient. Children are more likely to be permanently cured than adults. Even when a complete cure is unlikely, most people with a chronic leukemia and many people with an acute leukemia can be successfully treated for years. Sometimes, leukemia is the effect of another cancer, known as blastic leukemia, which usually involves the same treatment, although usually unsuccessful.
Leukemia can affect people at any age. In 2000 approximately 256,000 children and adults around the world had developed some form of leukemia, and 209,000 have died from it.[1] About 90% of all leukemias are diagnosed in adults.[2]
The name comes from Ancient Greek λευκός leukos “white”, and αἷμα haima “blood”

Arriving at the hospital we were sent directly to a room on the fifth floor. She was told to put on the standard issue gown and relax.  We looked into each others eyes, held hands and sat together on the bed, waiting for someone, anyone to tell us something, anything. A couple who the day before yesterday was riding horses together without a care in the world was now sitting, scared, wondering about the future for ourselves, our children, and our family.

We wouldn’t have to wait long…

17 thoughts on “The face of Leukemia”