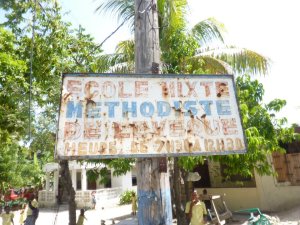 Awoke at 0600, oh who am I kidding, I never really slept.  Between the dogs fighting on the compound, what seemed to be one hell of a party going on in the alleyway or house next door, anticipation of the days to come and the sticky, wet heat that encompassed our room, sleep never came. Pretty disappointed, because after what I felt was a long day yesterday, sleep would have been beneficial.  Came downstairs to the smells of breakfast wafting gently from the kitchen.  Shuffled my way over to some coffee and was pleasantly surprised by how

fantastic it tasted.  Smooth, mellow, robust, nothing like any coffee that had previously crossed my palate!

Sitting down at a table outside, the smell of burning garbage rose over the compound and once again I began questioning my purpose for this journey.  After a while John C. and John G. joined my table, soon we were discussing upcoming events for the day and how things may play out.  Paul came down then Cody and slowly the rest of the team emerged, shuffling slowly, looking for hot coffee.  After several cups, we all began telling tales of a rough night had by all, apparently I was not alone in my suffering.  Joking about the chickens, anger for the dogs

and laughter at our own silliness.  We had bonded fairly quick as a group, which usually is a sign of impending personality clashes. (watch survivor, you think everything is fine and then BAM your torch is being snuffed out)) But every time we all sat together I could feel the glue forming between us, an alliance of you will, this would ultimately prove to be the foundation for great new friendships and help us during our survival over the next eight days.

Breakfast was started with a prayer.  Three teams formed into a giant circle holding hands praying. It was a powerful moment, starting the morning off on a wonderful note.  After breakfast we chatted it up with several other members, slowly making our way upstairs to gather our things as departure time closed in on us all.  Funny thing about embarking on an unknown journey, nervousness does take hold of you whether you realize it or not.  The unknown is a tricky thing, it can paralyze to the point of inaction or spur you on to some of the greatest triumphs you may ever know.  In eight days we would all have an accounting for our performance.

After our luggage was gathered, we were introduced to our interpreters.  Caz and

Marcinae (Im guessing on the spelling.) Walking directly up to Caz extending my hand he warmly accepted my handshake as I introduced myself.  I was very glad to meet this man for I already felt as though I knew him. John C. and John G. along with my wife had regaled us with wonderful stories of his caring attitude and generosity towards their group a mission trip last year.  He was an intern then, but handled himself like an old veteran.  We reminisced for a few minutes and after showing him pictures of my wife in Mellier,  he instantly remembered who she was stating; she was fantastic with the school children and a very caring person.  He then raised an eyebrow, leaned in towards me asking how I felt about a woman traveling to such far away, unknown places before myself? My retort; If you have met and befriended my wife then you learn very quickly once her mind is set there is no stopping her. He chuckled and said yes this may be true.  Five minutes with this man, my guard was completely down.  My first sense of safety crept in and I instantly knew we were in fantastic hands.

It was time to go, time to leave the Port-au-Prince Hilton.  The KIA truck was loaded with all our luggage and supplies for eight

days, the Toyota was loaded with 13 willing and able bodies ready for an adventure.  The gate opened to the compound leading us out to an alley we had not seen previously, our eyes were once again opened to a strange new world of adventure and uncertainty.

The alley way was congested with people cooking food, grinding metal, fabricating gates and repairing stereo equipment that here in the United States we would have discarded like yesterdays newspaper.  The alley was no wider than a single car leaving us to squeeze ever so carefully through its bowels. As we made our way into the street (slowly) it was extremely congested, more so than the day before.  The previous day had been a holiday so many shops and businesses were closed.  The shocking moment for myself and some of the crew was the streets had been very congested the day before which left us in awe at the amount of people moving to and from their destinations today. In hindsight yesterday was merely a fraction of the population that now lay before our eyes.  Travel was slow, hot and bumpy. Once again there were times the smells became a little overwhelming.  These people moved about their day with a huge sense of purpose.  Constructions sites were a buzz, markets were humming and everywhere you turned the city felt alive!  My head hung to the glass like a voyeur trying his hardest to

experience every moment without being noticed.  Traffic in Haiti still bewildered my sense of safety.  Horns honking, cars moving where they pleased, it was a very gentle ballet of automotive synchronicity. In America many of the movements  or automotive “bullying” that we participated in would have resulted with someone being on the end of a broken nose. Yet here people just waved you by, (and not with a middle finger in the air) waved thank you or stared blankly with no emotion at all.  All by the honk, beep or blast of a horn.

Our team had one stop to make before our final destination. We were hoping to acquire a few more sledge hammers for the work that lay before us.  Our van pulled into a large concrete fenced yard and to our surprise the place was not a run down dilapidated structure as we all had envisioned.  In fact the structure resembled that of a Home Depot! A home depot with parking attendants and an U.N. military vehicle with soldiers parked within its walls.  John, John, Caz and Paul went inside for a short excursion inside the man store.  Myself, Cody and the rest of the crew remained outside with our vehicle.  Personally in my humble opinion, once you have seen one Home Depot you have seen them all.  I was more interested in the heavy traffic of dump trucks (by the way we found out Haiti is where all retired Mack trucks wander off to die) tractors, excavators, and everyday vehicles whizzing by on the street outside.  A few more jokes were cracked, a couple of comments about the heat and before long we were off with our newly acquired toys.

The drive was long and hot. (have I mentioned it is relatively hot here?)  A combination of paved roads, dirt roads and just plain old pot holes left us feeling as though our kidneys were now no longer usable for transplant. (mental note, change donor card upon arrival home) Once out of the city en route on highway one we passed by several areas still heavily impacted from the quake.  We also passed by the largest tent city on the island.   Interesting really; tents, shacks scattered everywhere across the open plains, then an  occasional house under construction with a few completed homes scattered about.  Homes and shanties in desert/shrub like conditions where one would never think to build or create a homestead.  When John asked Caz about the housing situation, Caz stated the

government had given away the land to residents looking for a new start and willing to build upon the site.  The site was hilly and dry but the upside was it overlooked the ocean.  Either these people were completely crazy or evil geniuses.  Genius in the fact that 20 years from now they will own beautiful homes overlooking some of the bluest ocean any human could ever lay their eyes upon. Once again being resilient is definitely not a Haitian weakness.

We arrived in Leveque almost two hours after departing the guest house.  Hot, tired and sweaty we all clamored to get out of the Toyota van.  We had parked in what appeared 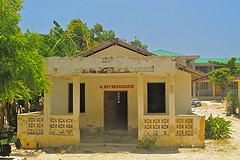 We quickly gathered up, unloaded all of our equipment, hauling the majority upstairs to 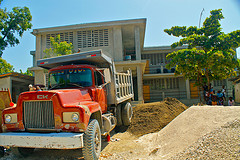 the second story of the new building.  This building was a new school built by a British team for the church.  The upper floor had not yet been put into operation, leaving it as our new primary residence complete with kitchen for the next eight days.  Our team had originally been scheduled to live at a new church built down the road in the town of Thomas. This would have left us commuting every morning to our job site in Leveque.  When the pastor discovered this plan he vehemently argued for our location change hoping a new team and project could meld into his community creating everlasting friendships while sharing the word of God.  He was wise beyond words.

Having moved into our three rooms. One for the kitchen, one as sleeping quarters for the men, one for the women.  We all gathered back downstairs, meeting the pastor while introducing ourselves to 5 construction workers, our new future Haitian friends. We traveled thousands of miles and there seemed to be no time like the present to get started.  Energy was high, we surveyed the building, 40x 100, cinder block with stucco/concrete overlay, tin roof, two small rooms leading into one big assembly area.  The building had several mid line cracks and a portico that had damage to three of its four columns.  We devised our strategy and came up with a plan of attack, a few of us could hear the sound of tools calling our names. Hats pulled down tight, work belts on, hammers and pry bars in hand.  Ten Americans in one foreign country with a single goal in mind.

Time for one 63-year-old earthquake damaged church to come down!